Music For Mushrooms: A Soundtrack For The Psychedelic Practitioner | (2019) 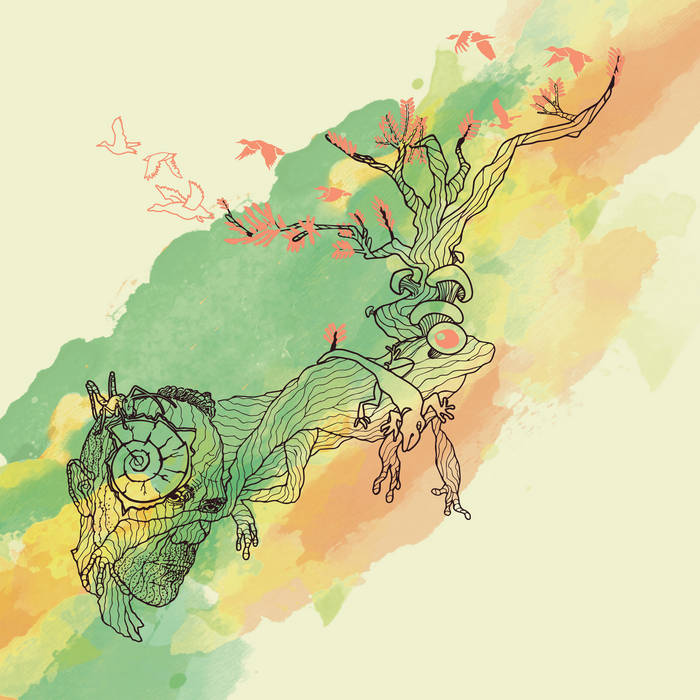 hazelmandala i have been deeply moved by this soundtrack! speechless. thank you. so much gratitude

Kamari Even without the mushrooms :) this music feels transformational. It's calming, grounding, energizing, mystical, compassionate, even healing, and I can't stop listening to it. I can't remember how I discovered East Forest but I'm glad I did.

"Music For Mushrooms: A Soundtrack For The Psychedelic Practitioner" is a five hour, fully connected journey designed to musically guide a group or individual through an entire psilocybin experience, start to finish.

This album aims to forge a new shamanic path — one that is birthed of our musical tools and the technology of our time while also honoring and inspired by the rich history of our human relationship to psychedelic plants and fungi.

The album's compositional shape guides the arch of the ceremony experience. The music of the current psilocybin public research therapy playlists (like those offered by Johns Hopkins and Imperial College) is an amalgamation of tracks by different composers - none of the songs were originally intended for psilocybin. Further, most of these songs are comparatively short. The songs of "Music For Mushrooms: A Soundtrack For The Psychedelic Practitioner" are all extended connected tracks — some up to 30 minutes — with a slow and gentle growth, an organic progression that aligns with the waves of feeling and experience in the psychedelic journey. This progressive unfolding allows the journeyer to enter into sonic and emotional worlds gradually, to explore the psychic depths with peaceful transitions that allow for time to integrate the experience before moving into the following song or space.

Additionally, "Music For Mushrooms" integrates original nature field recordings throughout the composition. It is well known by experienced mushroom users that nature provides a special solace in combination with the active ingredient, psilocybin. Field recordings of “that which is still wild”, provides a soothing synthesis of nature into what might otherwise be a staid and sterile therapeutic setting. Sounds of nature can unlock memories, calm our senses, and contain a texture that welcomes our most ancient self home — whether a chorus of crickets or a gentle mountain breeze.

As mentioned, "Music For Mushrooms: A Soundtrack For The Psychedelic Practitioner" was recorded and improvised live, while guiding group ceremony. In this way, it contains the ‘energy of the medicine’. It was birthed in the moment, reacting in real time to the ebb and flow of a collective journey. Plant-based medicine ceremony historically used music as its primary vehicle and that music was of course, live. This is not an encumberment of a pre-1900’s lack of electricity or prerecorded music, but rather of the relationship of the guide/singer/shaman using tone and frequency as a central element in crafting the set and setting of the ceremony. Needless to say, playing and creating music in real time inside a ceremonial setting is a unique stage from which to record music.

The new album is intentionally conducive to the psychedelic experience in a variety of additional ways, like avoiding lyrical content so as not to spark the language centres of brain. The record employs falsetto vocalisations throughout, utilizing a non-lyrical language composed primarily of improvised vowels. The voice becomes more of an instrument communicating via melody and vocal texture more than words. This allows for the benefits of vocals without the potential language triggers of lyrics. With the live looping technology I employ harmonies and a full choir can develope.

The sound of "Music For Mushrooms" couches itself in western melody and an instrumentation familiar to the western ear such as pianos, harmonicas and fender rhodes keyboards. Comparatively, traditional Icaros, the centuries old sacred songs of the Amazonian Ayahuasca ceremonies, can have stark shakers and likely unfamiliar Quechua language. No doubt Icaros are a form of highly effective spiritual technology, and are an integral element of a traditional Ayahuasca ceremony. But psilocybin doesn’t have a musical equivalent to the Icaros of South America. The recent proliferation of underground Ayahuasca ceremonies all across the world has maintained, integrated into the experience, the element of ceremony. Ayahuasca isn’t used recreationally. Amazingly, ceremony has never detached itself from this drug. Psilocybin, on the other hand, while music is in the drug’s ceremonial cultural past, has remained almost entirely recreational for westerners. There is no known specific heritage of music with psilocybin. Most people have never experienced psilocybin inside a ceremonial setting. Music For Mushrooms aims to create a new sonic tradition and one that all of our ears can understand.

While listening to "Music For Mushrooms" our brain won’t need to work overtime to understand the musical lexicon presented because the album uses pianos and chord progressions primarily rooted in contemporary music. At the same time the record does utilise indigenous musical elements like native flutes, shakers and Tibetan bowls. These ancient native instruments can be used effectively in select musical moments to connect the dots of our human psychedelic history into a contemporary shamanic listening experience. It serves as an ancestral bridge that honors old ceremonial technology and integrates it with a modern instrumentation.

All of these techniques and methods calm the body and mind and set the stage for a safe and positive psychedelic experience. The results of the recent psychedelic studies are promising, and I am hopeful we are entering into a golden age of psychedelic research. It is our birthright to explore our consciousness, and in understanding ourselves we in turn understand one another.

What is being called for in our time is a fresh shamanic lineage -- one born out of our needs and this time. We are being asked to step forward, to build on the lessons of our ancestors while trailblazing a shamanic future that ties together the pinnacles of history. Music is a necessary ingredient in this transformation.

I’ve always intuitively felt that the solutions our world needs will not come from the top down. Rather, the answers we’ve been looking for will come from the inside out. By exploring our interior landscape to heal our traumas, to root out shame, to learn to love ourselves, we empower our ability to make positive changes that echo out into our lives and the world around us.

**This album is intended to be listened to as one continuous connected listening experience. Please adjust your playback settings accordingly and insure tracks are played in correct order, without shuffle or repeat engaged. And if playing back from your phone, of course use "do not disturb" and airplane mode to insure an uninterrupted listening experience.

All music written, mixed and performed live by East Forest

This album is offered in the spirit of the gift -- if you are interested in paying in addition to the minimum suggested price, you are welcome to pay whatever reflects your feeling of fairness, value and gratitude.


Disclaimer: Note that psilocybin is deemed Schedule I substances under the United Nations 1971 Convention on Psychotropic Substances and is illegal in most countries, outside of government sanctioned research studies. The composer and author of this album, “Music For Mushrooms: A Soundtrack For The Psychedelic Practitioner”, and ceremony kit, by East Forest, do not condone the use of any substances illegal in your jurisdiction. The author expressly disclaim any liability, loss, or risk, personal or otherwise, that is incurred as a consequence, directly or indirectly, of the contents of the album and ceremony box.